Between a Persian restaurant and a pupuseria, chef Jonathan Yao works meticulously on his tasting menu at Kato. The Michelin starred joint is a time capsule; Yao brings in childhood flavors from his Taiwanese heritage and translates them, elevating home-style food into something that stands out among the already congested Los Angeles food scene. “I spent a lot of time alone or taking care of myself, so I just always grew up prioritizing food,” Yao says.

Recently featured on “Forbes”’ “30 Under 30: Food & Drink” list, Yao remains humble despite his success, and maintains the philosophy that food is all about the ingredients. “We do seafood simply, not too simply, but in a way that whatever product we use, you can actually taste and understand what you are eating,” he says. Kato is a 27-seat dining experience in the heart of Los Angeles, and because of its size, chefs are able to provide a heightened focus on the dishes and individual guest experience. Yao focuses on simple products that tell a heritage story.

“Cooking reminds me of all the times I spent with my family. I associate happiness with food,” he says. Like many members of immigrant families, he grew up surrounded by food. Hard-working parents meant that meal time was family time, and he poetically embraces this concept. His perspective is that food is a medium to explore culture, and he’s not wrong. Countless food vloggers and travel journalists are pointing their lenses at younger and more experimental chefs like him, because it’s these little fish who are willing to swim against the current.

Even though Yao has traveled globally for work, his work brought him back to his family and his roots in the San Gabriel Valley. He’s a self-taught chef, whose academic background is in anthropology. Before Kato became the big deal it is now, Yao’s parents set up a lunchbox-style place, catered towards students from the University of California, Los Angeles. When the restaurant encountered some financial hiccups, Yao stepped in to work logistics and the space changed into something the young chef had more familiarity with. “We tried some things that eventually became what [Kato] is today, a curated experience,” Yao says.

He introduced the tasting menu concept, which is now the restaurant’s signature. “I like tasting menus more because you get to dictate the exact experience that the diner will have. In a-la-carte restaurants, there’s more room for error,” Yao says. The menu is curated and typically smaller than one might expect, but the work can often be more grueling on a tasting menu. “Farmers and fish purveyors will let us know what’s coming in and what’s going out, what’s special at the time, what’s unique,” Yao says. “So I try and piece that together with what I feel inspired by.” In the early days of Kato, serving what he thought that Angelenos wanted wasn’t bringing in business, and a light went off. Ethnic food is now something Yao takes pride in, knowing that his culture’s dishes are now generating the industry buzz they deserve.

Kato’s steamed fish has become a staple on the tasting menu, alternating fish species depending on seasonality. At the time of the interview, the restaurant models the dish after the quintessential Chinese-Taiwanese recipe. Although every home has its different variation, the archetypal version is a delicate steamed white fish with ginger and scallion, then hot oil is added to aromatize the dish and it’s topped off with cilantro and soy sauce. “This is one of the dishes where I put my foot down and said, ‘We’re going to be a Taiwanese restaurant. We’re not going to gear toward any sort of other Asian restaurant,’” Yao says.

At the time of the interview, Yao cooks with a high-quality Spanish turbot, which he gets fresh daily. The turbot is a pricey fish, but diners will understand the luxurious quality when they bite into its firm and silky texture. After making a tea-like broth from the fish bones, aged soy sauce and rice wine, Yao wraps the entree in sheeted kohlrabi and tucks roasted ginger and scallion beneath. The scent of the dish is irresistible after being dusted with a house-made kombu salt. “So basically it’s the same dish, with all the same flavors,” teases Yao, “but intensified and presented in a different way.”

Yao and his work at Kato has put Taiwanese food on the Michelin map as an entry point into the culture, but he and his team aren’t stopping there. “We’re trying to get three Michelin stars doing Chinese and Taiwanese food, just to show that it’s possible,” Yao says. There’s confidence behind his words, but no arrogance. “I just want everyone to try this unicorn in its current state. I know it won’t last, because we’re all growing up and moving on to different things. But it’s definitely an L.A. experience!”

March 23, 2020: Due to the Safer at Home order in place in Los Angeles, Kato has temporarily closed its doors, but the team plans to re-open in the future. 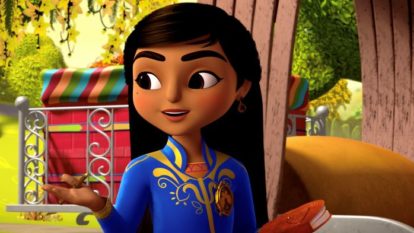 A little girl in a royal blue detective’s uniform dances across the screen with two animated mongooses. As she locates a clue, she pulls out her magnifying glass and […]