It’s no secret that Japanese internment camps were one of the darkest chapters of American history. But what if some super creepy ghosts got thrown into the mix?

“The Terror” is a horror drama anthology based on the Dan Simmon’s novel of the same name. The first season of “The Terror” covered Sir John Franklin’s ill-fated expedition into the Arctic and featured ravenous polar bears, mutiny and cannibalism. “The Terror: Infamy” will consist of ten episodes and follows a West Coast Japanese American community being plagued by a mysterious, supernatural Japanese specter during the era of Executive Order 9066. Actor Derek Mio (“Hawaii Five-O”) will play the lead role of Chester Nakayama, a first-generation Japanese immigrant who joins the army. George Takei (“Star Trek”), in addition to serving as the show’s consultant producer, will also star as Yamato-san, a retired fishing captain. Helmed by executive producer Ridley Scott (“Blade Runner”), Alexander Woo (“True Blood”) and Max Borenstein (“Godzilla: King of the Monsters”), “Infamy” is set to make its spook-tacular debut on AMC on Aug. 12.

The first peek at “Infamy” promises plenty of creepy crawlies, mysterious shape shifting spirits and some strange, evil-looking women. Just how will Mio and Takei get out of this one? 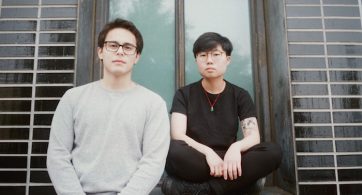 Austin-based “bedroom pop project” fuvk are engineers by day and musicians by night. Although they’re now an ensemble of three, fuvk initially began as the “personal journal” of singer-songwriter […]