Asian and Pacific Islander stars turned out in full force at the 2021 Unforgettable Gala.

The Unforgettable Gala returned to Los Angeles’ Beverly Hilton hotel on Dec. 11, 2021 for its 19th anniversary. This year’s event was made possible thanks to the generosity of presenting sponsor Lexus. Additional event sponsors include Joseon Empire, Genesis One Foundation, Panda Restaurant Group, J&K Gouw Foundation, M&L Hong Foundation, Pechanga Resort Casino, Le Mieux, The Coca-Cola Company and Rémy Martin. The gala’s theme was Rise, celebrating the hard work of AAPI leaders while acknowledging the struggles our community has undergone in the past two years.

The night started with a red carpet celebrity reception. After dinner, Character Media publisher James Ryu started the festivities by introducing the gala’s keynote speakers, actors Daniel Dae Kim and Ashley Park. The two commented on the significance of the AAPI community finally reuniting in person after the past two years. “I don’t think it’s news to any of us that these past couple of years have been challenging,” Kim said, acknowledging the rise in anti-Asian sentiment that has persisted throughout the pandemic. “But that is one of the reasons why an event like tonight’s is so significant. It is important that we not only speak up in defense of our community, but it’s equally important that we celebrate its achievements.”

Following their speeches, host Sherry Cola took the stage to present her opening monologue. “I can’t wait to shine a light on all our well-deserved honorees tonight, but first, we have so much to catch up on,” she said, before performing an original poem recounting some of the past two years’ highlights for Asian Americans in entertainment.

Cola then kicked off the evening’s awards ceremony, recognizing API pioneers in the entertainment and cultural landscapes. Winners included Simu Liu, Maitreyi Ramakrishnan, Adele Lim, Jubilee Media founder Jason Y. Lee and many more. Actress Sandra Oh took home the Actor in TV Award for her work on the Netflix miniseries “The Chair.” “The biggest thing I feel so intensely is all of you,” she said to the audience during her acceptance speech. “For a lot of us who have really been working for change for a long time, it’s been fairly isolating, and this is not an isolating moment. I’m so inspired.”

“Cowboy Bebop” star John Cho, meanwhile, landed the Lexus Legacy Award. In his speech, he shared his memories of Character Media’s history and how the publication has provided a platform for the AAPI community. “Looking at all the talent assembled in this room, I’m very gratified to know that as glamorous as this evening has become over the years, the focus here is still on our stories, our shared history and celebrating our community,” he said. “It is a very special honor to be recognized by an organization that has touched me so personally.”

Skits featuring Poorna Jagannathan, Manny Jacinto, Eugene Cordero and more appeared throughout the ceremony, which also featured musical performances from MC Jin, Audrey Nuna, NIKI and Korean Soul. To close out the night, Beverly Hills-based musician Oya was joined on stage by Korean Soul, AJ Rafael and Alyssa Navarro for a performance of an original song, “Look At Us Rise,” recognizing the struggles faced by the Asian and Black communities in recent years and celebrating our triumphs.

That’s not all that went down at the gala, though. Check out our Highlights video above for more, and keep scrolling for our full lists of award winners.

BREAKOUT IN TV
Presented by Punam Patel and Chris Pang
Maitreyi Ramakrishnan, “Never Have I Ever”

BREAKOUT IN FILM
Presented by Benedict Wong and Fala Chen
Simu Liu, “Shang-Chi and the Legend of the Ten Rings”

DIRECTOR
Presented by Nina Yang Bongiovi and Alan Yang
Destin Daniel Cretton, “Shang-Chi and the Legend of the Ten Rings”

Here at Character Media, we’re looking forward to celebrating many more API projects and talent in 2022! 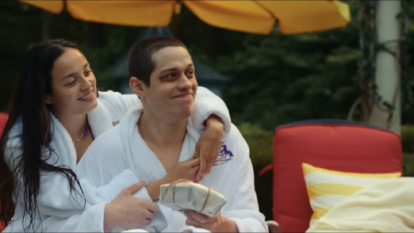 A new addition to the cast of ‘Bupkis,’ Wonders is set to work with ‘Bodies Bodies Bodies’ co-star Pete Davidson on another comedic project.