The first time Justin Chon and Kevin Wu (a.k.a. KevJumba) teamed up in a film, they were Chinese immigrant brothers who become involved with a NYC Chinatown gang. This time around, things are a bit more lighthearted, although Wu still has his glorious mullet.

Man Up is a buddy comedy follows 19-year-old slacker, Martin (Kevin Wu), who has big plans after high school graduation—to do absolutely nothing. He plans to spend all summer hanging out with his friend, Randall (played by Chon), and playing video games, but his summer plans get complicated when Martin’s girlfriend, Madison (Galadriel Stineman), reveals she is pregnant.

After delivering the big news, Madison refuses to see Martin until he grows up, as his demeanor is carefree to a fault. Her family sees him as an unambitious bum who can barely take care of himself, let alone a newborn. Thus, Martin and Randall embark on a “manquest” to figure out what it means to be a dad and “man up.”

The film is now available to rent or buy from Vimeo On Demand. You can watch the trailer below or check out the Man Up website.

Man Up – Trailer from MAN UP Film on Vimeo.

Man Up is also Chon’s directorial debut and is the first film to be released from Off the Dock, a full-service digital studio that was recently acquired by Lakeshore Entertainment. The film is produced by Kinetic Pictures with distributor Supergravity Pictures.

Above image via USA Today 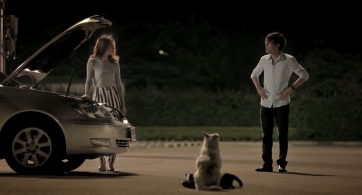 Thai commercials are known to be quite a bit more dramatic and attention-grabbing than the commercials we’re used to. How easy is it to become emotionally invested in […]