Ken Jeong in The Hangover

If to be typically Asian is to be quiet, docile and conventional, then every now and then it may be worth it to surprise us all and go amok.

Sure, it may seem like committing social or political suicide, but won’t it feel good to break down a few stereotypes while you’re at it?

That’s why I’m encouraged by the emergence of a totally amok force that is single-handedly changing the Asian male image in Hollywood.

Without one karate chop in sight.

He’s not the lead, but he’s a scene-stealer, arguably the most memorable guy in any production he’s in. It’s mostly because you don’t expect anything out of him. He’s a normal looking Asian American. And then he does his thing, usually something like a loud crowing “ai-yi-yi-yi” at the top of his lungs, accented with a “muthafu*ka!” thrown in for good measure.
Who he? That’s what most people ask when they see “that Asian guy”—Ken Jeong. A Korean American doctor (so we know he’s smarter than the average bear), Jeong broke the chains of convention and started doing a standup routine that turned the Asian American male stereotype on its head.

Asian doctors, yeah. But why no Asian veterinarians? Jeong’s answer: “They’ll eat all their patients.”

Small-fry stuff. But then he hit the big screen. In Knocked Up, the doctor plays an ob-gyn and delivers a gut-busting soliloquy on the differences in the labor time of white women vs. Asians. And then there’s his “guy in the car trunk” antics in The Hangover, where he is a combination anti-Jackie Chan and a modern day send-up of a Fu-Manchu-less villain. Oh, and did I mention? He’s NAKED. On television, Jeong has a continuing role on NBC’s Community, where he plays a weird fish out of water: The Asian Spanish teacher (hey, shouldn’t that be a Filipino?) But for me, his most memorable TV appearance was on a recent Conan O’Brien spot. Jeong hijacked the show by messing mercilessly with the previous guest, tennis phenom Serena Williams, who didn’t know what hit her. I saw it as sweet revenge for Williams’ tongue lashing of that poor Asian American tennis judge at this year’s U.S. Open. After Jeong’s public teasing, I’m sure Williams had a different sense of Asian Americans.

They’re not so quiet after all.

The importance of an amok Asian male image on movies and television is significant considering this is where our stereotypes are created and reinforced. Since World War II, the Asian male image in pop culture has suffered mostly due to a residual backlash against foreign Asian male enemies like Emperor Hirohito. The modern day version would be Kim Jong-il. The result has been an inability to embrace the Asian American male in Hollywood’s image machine, which for generations has given us the likes of Warner Oland as Charlie Chan and Mickey Rooney’s bucktooth Asian. What’s more mocking than a white guy in yellow face? It was the comic standard. Asian males were perfect for vilification, emasculation, and overall, denigration. When Shaquille O’Neal starts “ching chonging” like it’s no big deal (remember how he mocked Yao?), we’re in trouble. Of course, we’ve had Bruce Lee and all the martial arts guys to retaliate. But they were imported stars. That makes it positively refreshing to see Jeong infiltrate Hollywood with a modern version of an Asian American male that is loud, obscene, and takes no crap from anybody.

HAROLD AND HUNG
Let us not forget another Korean American, John Cho, who in the Harold and Kumar franchise, has updated the “opium smoking Asian” with the modern “pot smoking Asian” stereotype. Cho’s a good actor, but his acting presence is a more traditional and earnest one. Jeong’s amokness is so surprising, it’s over-the-top funny.

One might ask, “Is that the image we Asian Americans want?” Well, at least they’re laughing with us, and not at us. That’s progress.

The same cannot be said for one William Hung, whose awful singing on American Idol made him an Asian American Stepin Fetchit.

Hung was real, which made him pathetic. Jeong is a real talent, a comic genius.

Certainly, there have been Asian male comic actors before.

But in his films, Jeong is an Asian guy who breaks out of his yellow skin. We aren’t used to seeing that kind of out-of-the-box Asian, the one capable of breaking every tired stereotype, creating a few new ones, and leaving everyone in his wake laughing uncontrollably.

Emil Guillermo is an award-winning journalist, one-time host of NPR’s “All Things Considered,” and author of Amok: Essays From An Asian American Perspective. After 14 years at AsianWeek, he was considered the most widely read columnist on Asian American issues in the United States. He blogs at www.amok.com. 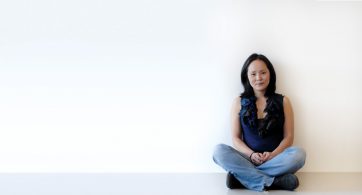 By Ellis Song Photograph by Eric Sueyoshi In 2007, a suburban county in Virginia was the site of a fierce battle over immigration. Those with deep roots in Prince […]