Hong Chau, who stars in the star-studded “Downsizing,” alongside Matt Damon, Christoph Waltz and Kristen Wiig, is nominated for Best Performance by an Actress in a Supporting Role in a Motion Picture for the 2018 Golden Globes.

Chau, a Vietnamese actress who grew up in New Orleans, is a relatively new face on the screen. Her feature film debut was through “Inherent Vice,” in 2014.

Other Golden Globe nominees include Aziz Ansari, who stars in and co-created the hit Netflix comedy-drama series “Master Of None.” He’s nominated for Best Performance by an Actor in a Television Series, Musical or Comedy. The show, which is also written by Alan Yang, is also nominated for Best Television Series, Musical or Comedy.

“Coco,” the Pixar animated film based on the Mexican holiday of the Day of the Dead, is nominated for Best Motion Picture, Animated, and features the work of Filipina animator Virginia “Gini” Santos, Pixar’s first female supervising animator.

“The Breadwinner,” an adult animated drama film from Angelina Jolie that is based in Afghanistan, features a full voice cast of Afghan and South Asian actors, is also nominated for Best Motion Picture in the Animated category.

You can view the full list of nominations for the 2018 Golden Globes, which takes place Jan. 7, here. 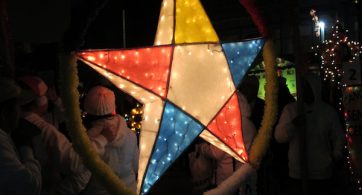 As the Asian country with one of the largest Christian populations, it comes as no surprise that Christmas, or “Pasko,” is one of the biggest holidays in the Philippines. […]