with a hundred other hungry
jostling animals
Noble species of
the past century:

Journalists vs. Paper Tigers
Editors vs. Equivocators
Writers vs. worshippers

Editor, writer and teacher Russell C. Leong penned this poem this past February, on the occasion of veteran newsman K.W. Lee’s nomination as one of the 100 journalists of the past century at NYU Journalism School. And NYU is not the only institution celebrating him these days. The Newseum, in partnership with the Smithsonian Institution, in Washington, D.C., is also recognizing the crusading, Pulitzer-nominated journalist of both mainstream and ethnic press in a new exhibition titled “One Nation With News for All.” It tells the story of how immigrants and minorities used the power of the press to fight for their rights and shape the American experience.

Himself an immigrant to these shores, Lee, now 86, led a decades-long, award-winning career as a mainstream daily newspaper reporter, known for writing stories that put corrupt politicians in jail, humanized the poor and freed an innocent Korean American death row inmate from prison. But he also felt a calling to start two English-language Korean American newspapers, the Koreatown Weekly, born in the late 1970s, and the Korea Times English Edition, which debuted in 1990, just two years before the L.A. riots. He is widely recognized as a Korean American community sage and mentor figure, embraced by several generations of Korean Americans, including college students who appreciate his truthful candor and fiery speeches, as well as people of all backgrounds. Various journalism scholarships and an L.A.-based nonprofit focused on fostering conscientious community leaders bear his name.

KoreAm has also been fortunate to run many of Lee’s commentaries over the years. And, in fact, as part of the Newseum exhibit, there is a video showing filmmaker Annabel Park reading an excerpt from Lee’s piece about the L.A. riots, from KoreAm Journal’s April 2012 issue.

(Top photo: These press passes of Korean American journalist K.W. Lee, a pioneer in mainstream and ethnic journalism, are featured in the Newseum exhibition, “One Nation With News for All.” Image courtesy of the Newseum.) 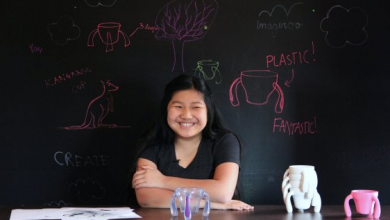 Just last week we brought you the touching story of Angelo Casimiro. The Filipino teen created footwear which can can generate electricity by simply walking. The 15-year-old was inspired by the […]