Looking for positive, non-stereotypical representations of LGBTQ Asian individuals can feel like searching for a tiny rainbow needle in a haystack of Cameron Posts and Elios (don’t get us wrong, though, we’re still teary-eyed over “Call Me By Your Name”).

But according to media organization GLAAD, the number of visibly queer Asian characters is finally on the upswing. According to their annual report, “The percentage of API LGBTQ regular and recurring characters on broadcast has doubled to eight percent from only four percent in the previous year.”

There’s still a long way to go, but for national Pride Month, we’re celebrating our favorite queer API characters on film and TV. May we see many more Eve Polastris in the future!

Played by Filipino actor Nico Santos, the “rainbow sheep of the family” helps pick out Rachel Chu’s iconic blue gown for the big wedding. Nick’s fashionable cousin isn’t short on catty comments, but that makes his heartfelt remarks all the more touching.

Made in the early 2000s, Wil and Vivian showed that romantic relationships between two strong Asian American women are—gasp—nothing new. It might have taken some time for Wil to publicly embrace her identity, but she proved that love is always worth chasing.

Choi (left) might have some scary superpowers, but our favorite Choi ability is how she stands up for herself and those she loves. Also, she can whip up a mean cocktail.

4. Zane Park (“Degrassi: The Next Generation”)

In a time when TV representations of both queer and API individuals were about as rare as unicorn sightings, Park was a breath of fresh air. He reminded his boyfriend Riley and viewers that there’s more than one way to be gay, and it doesn’t have to involve fashion and shopping.

Although this show’s constant drama could get a little grating, one of its highlights was watching Emily, a young Filipino American, navigate unfamiliar territories of dating girls and exploring her sexuality (when she wasn’t being tortured by a mysterious stalker, that is).

In this Ang-Lee directed dramedy, Wai-Tung faces a familiar dilemma: How to come out to conservative Asian American parents, without giving them a (literal) heart attack. To save face, Wai-Tung engages in a “marriage of convenience” with his artistic, female tenant. Although we love watching Wai-Tung’s antics, we hope that most people can resolve their own coming-out dramas a little less creatively.

Neptune (Michiro) and Uranus (Haruka) were one of the first same-sex couples in Japanese mainstream media, and the creator of the show even confirmed that the two sailor soldiers were a couple. But thanks to U.S. broadcast sanitization, Neptune and Uranus were reduced to cousins rather than girlfriends.

Although Polastri’s sexuality is never explicitly confirmed on the show (is she queer, bisexual, something else?), watching her epic cat-and-mouse game with assassin Villanelle (Jodie Comer) never gets old. Anybody else can’t wait for season 3?

Korrasami fans everywhere rejoiced when, after a series finale that showed the two women walking away hand-in-hand, the showrunners confirmed that the two characters are now in a relationship. The pair is one of the few same-sex couples on TV, much less on an animated children’s TV show. It may have taken all four of the show’s seasons to get there, but better late than never, right?

When Sharma’s character was first introduced in 2009, she was credited as the first LGBTQ South Asian character on television—ever. With her no-nonsense approach to her job and her unflinching attitude, Sharma paved the way for more groundbreaking queer characters, all while rocking awesome knee-high boots.

Werewolves and boyfriends (and werewolf boyfriends) are no big deal for lacrosse star Mahealani, played by Hawaiian model and actor Keahu Kahuanui. His Beacon Hills teammates and friends never make a fuss over his sexuality either, probably because they’re busy worrying about bigger things, like druids and serial killers.

The Grimm Sister’s powers might be mystical, but so are her eye-makeup abilities. Her flirtatious relationship with extraterrestrial magical girl Karolina Dean was made explicit in the comics long ago, but fans were delighted when she and Dean kissed on the show, making her the first Marvel character to have a same-sex kiss on screen.

The bisexual, immortal warlock, played by Harry Shum Jr., has had plenty of time to get around (with “men, women, seelies, warlocks, vampires…”), but in the show’s emotional finale he settled down with Shadowhunter Alec Lightwood. We’ll miss seeing that eyeliner and killer gothic style, though!

Played by trans actor Ian Alexander, Buck/Michelle Vu’s interdimensional travels were the centerpiece of “The OA”’s gripping second season. We’re still wondering if we’ll see more of the gender exploration surrounding Buck and Michelle when (or if) the show returns for its third season. 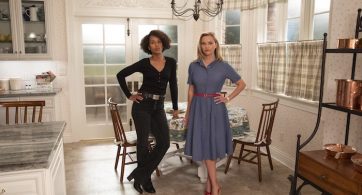