Who doesn’t love curling up with a bowl of noodles after a long day? From Shin Ramyun to Maruchan, instant ramen is the ultimate in quick and easy comfort food. But if you’ve got a little extra time on your hands, there are plenty of ways to spice up your bowl.

Sherry Cola and Steven Lim joined us in the fall of 2019 to share their personal tips for turning your instant ramen into a gourmet experience (well, maybe not gourmet, but pretty close). Cola, a stand-up comedian and actress, is best known these days for her role as Alice Kwan in the Freeform drama “Good Trouble.” Lim rose to internet stardom after hosting the fan-favorite Buzzfeed web series “Worth It,” and has since started a new media platform, Watcher, with his former Buzzfeed colleagues Ryan Bergara and Shane Madej.

Cola and Lim kicked off their cooking session by discussing their favorite soups and their plans for their ramen. Cola added Hello Kitty noodles, bacon and eggs as special ingredients, while Lim used coconut milk, shrimp and pork flank to transform his noodles into a dish inspired by Malaysian, Chinese and Korean cuisines.

While the two got cooking, they talked about their respective experiences in entertainment. “Right now, we’re seeing so much progress and more opportunities that it’s extremely exciting, especially for us to be witnesses and even part of it,” Cola said. “I do feel really lucky being a part of a show like ‘Good Trouble,’ where my character is first-generation Asian American with traditional parents, but she’s also queer.”

Lim, meanwhile, found inspiration from his fellow digital creators, like Ryan Higa, Wong Fu Productions and more. “Seeing those guys make videos, it gave me the inspiration to think that, ‘Oh, I could do it,’” Lim said.

Watch the full video above for Cola and Lim’s full recipes and conversation! 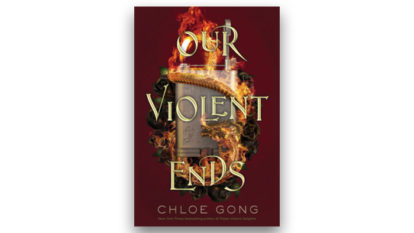 New York Times bestselling author Chloe Gong has delivered a sequel even more fiery and suspenseful than “These Violent Delights.”