Just about everyone has a go-to story they love to tell. You know the kind—these are the legendary tales that get passed along from person to person, making the rounds among friend circles and family members.

Inspired by an Australian show titled “True Story With Hamish and Andy,” the new Peacock series “True Story With Ed and Randall” collects and elevates some of those great stories. Guests share their real-life experiences of competing in school elections, overcoming wedding disasters, prevailing at the Super Bowl and much more with show co-hosts Ed Helms and Randall Park. Each episode also features cinematic retellings a la “Drunk History, ”with performances from the likes of Terry Crews, Jake Choi and Rob Riggle.

The first season of “True Story With Ed and Randall” premiered on Jan. 20 and six episodes are now streaming. Read our Q&A with Park here, then sit back and enjoy the show!

Character: How did you first get involved with the series?

Park: I had been meeting with Ed over the years and we had talked about trying to find something to work on together. It turns out [this show] was originally an Australian format and Ed and his team sent me some of the episodes. I asked him, ‘What’s my role in this?’ And he said, ‘Basically, just to sit down and listen to these amazing stories for the first time and to just react as we would react.’ I thought, Oh, wow, that sounds too good to be true. It was a no-brainer; it seemed like a really fun job.

Do you and Ed know anything about how the stories were selected?

The stories were vetted by the other producers. They had gone through thousands of stories and chose the best ones for the show. So, we knew what we were about to hear was going to be amazing, and that these storytellers were all great and interesting.

It’s kept away from us, so I don’t know anything other than there was an open call for stories. It was a pretty extensive process, and it took a while to listen to them all and to comb through them, to make sure they were right for the show and there was a difference in the types of stories being told. Also, making sure the storytellers were different from one another and representative of different perspectives.

How do you and Ed balance one another out as hosts?

We do balance each other out in different ways, but when I think of Ed and our roles, I think more of the similarities we share. I think we’re nice people, and we genuinely want to make sure these storytellers are comfortable and they feel at home with us. We both have this instinct to make people feel at home, and that’s one of the reasons I love Ed. He’s a great guy in that way, and it’s instinctual for both of us to want to make things feel warm and cozy.

What has been your favorite part of working on the series so far?

The actual production of the storytelling segments, really. Sitting there with Ed, whom I adore, and meeting a new friend and hearing a true story straight from them. That was really the great joy of it, connecting with these people and after every story, feeling like I really know them even though we pretty much just met. That was the greatest experience and one I hope we get to keep doing, because it’s just such a special thing.

Do you also have a go-to story that you can share?

The story of when I first started dating my wife [Jae Suh Park] is really interesting. [When] I met her, I was very much a struggling actor. We both were. And I met her and I fell madly in love. I found out she had dated this one guy who was an actor, and he was very successful, this actor. It made me very insecure, like, ‘Oh, gosh, I need to really find success in this,’ because at the time I was really struggling. I was like, ‘Why is she with me when she was with this successful actor?’

One day, I’m driving on the street and I see this giant billboard with him on it, staring right at me, with this new show that was about to come out. Everywhere I drove, this billboard felt like it was haunting me and taunting me.

That’s just the beginning of the story. It goes on a lot further, but it ends with me knowing she’s the right one for me and feeling very secure in our relationship. Now, we’ve been married for almost the past 13 years.

That could be a whole episode of ‘True Story’ in and of itself right there.

Yeah, it gets really crazy, too.

What would you say makes the show special, and why should audiences go watch the first season?

It’s very much about all of us. We all have stories like these in our lives and we’ve all been through things. The beauty of this show is that we take these everyday people, some of whom you may pass on the street and not give a second thought, but we give them this platform to share something that happened in their lives. We elevate those stories by giving them their own biopic and a professional cinematic treatment with really talented, amazing actors and comedians. And the message is that we all deserve that—we all deserve to be listened to and to be celebrated for all we’ve gone through. It’s a very unifying show; it connects us more than divides us, and these are pretty divisive times. You could watch it with your family, you can watch it in almost any context and come away feeling uplifted.

Ed and I are both so proud of this show and we had so much fun doing it. We hope people see it and are inspired and feel good. 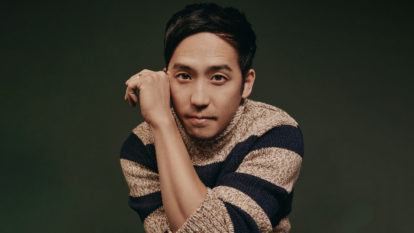 YouTuber and actor Jimmy Wong is here to remind us all to get back to the real world.