“The Eighth Girl” begins at the end of our protagonist’s story, on a bridge as she contemplates suicide. What follows—or precedes—is the page-turning action-packed thriller of a photojournalist driven by a moral compass she can no longer read.

Alexa Wú and her multiple personalities traverse the London underbelly, passing the torch of consciousness to the “individual” that fits better in each setting. It’s easy to envision something along the lines of the TV show “Sense8,” where characters switched into one another’s minds to help in a sticky situation, but the Dissociative Identity Disorder (DID) Alexa suffers from isn’t nearly as romantic. In her debut novel, psychoanalytic psychotherapist (yes, you read that right) Maxine Mei-Fung Chung uses Alexa’s character to showcase the manipulation and self-deception catalyzed by Freud’s less popular Electra complex. “The Eighth Girl,” which hit shelves on March 17, showcases Chung’s medical expertise intertwined with poetic writing techniques, such as “clicks” of Alexa’s camera that represent switches in time and personality.

The persona of Dolly, who enjoys attention, frequents “the light” in Alexa’s therapy sessions with Daniel Rosenstein, a psychoanalyst. Driven by her traumatic past, Alexa’s personalities manipulate her to get close (too close) to Navid, the boss and owner of The Electra, one of the hottest strip clubs in the London scene. And while she can move between the personalities that fit best in each moment, her ability to code switch between Chinese and English is what actually gains the trust of the higher-ups in the sex trafficking ring Alexa seeks to infiltrate. Honest, full of raw British and Chinese colloquialisms, Chung’s writing is unforgiving of both abuse and ignorance. Although she gives Alexa moments of happiness through food, friendship and good sex, drinking rose “bubble tea” will never be seen the same after reading this novel.

An allegorical masterpiece, “The Eighth Girl” presents the complexities of being Asian in a society that neither condemns nor condones, but instead fetishizes the physical characteristics of Chinese women. Chung often alludes to concepts of Orientalism, through the sexualization of Alexa’s Chinese heritage by the men of the novel, her father, boyfriend and the men who visit The Electra.

Triggers for Alexa’s personality switches become more frequent as the novel picks up speed, and chapters shorten, leaving Alexa as more of a host rather than a conscious personality. Left in the background of her own story, Alexa wonders if putting a lens, literally and figuratively, between herself and the world has protected her up until now both mentally and physically. She reflects on her compliance with the chaos which surrounds her and wonders how much responsibility she must take for her actions and the actions of her personalities.

Those questions are never fully answered, but Chung’s use of dramatic irony will have audiences biting their lips in anticipation, watching all of Alexa’s different personalities collide while, like Daniel, they must sit back and wait for her to discover the truth on her own. 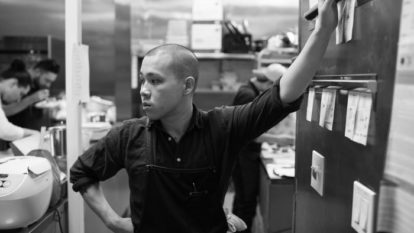 Between a Persian restaurant and a pupuseria, chef Jonathan Yao works meticulously on his tasting menu at Kato. The Michelin starred joint is a time capsule; Yao brings in […]