As they speed northward on the highway to Montreal, three young men in a rental van whoop and cheer after a successful escape from their overbearing parents. Their overtired driver Sam shakes her head in annoyance as one of the men starts rapping along to music on his headphones. Forgoing the wheelchairs and canes, this could be any other American road trip comedy.

A remake of the 2011 Belgian film “Hasta La Vista,” “Come As You Are” follows three men with disabilities (or rather, two “persons with disabilities” and one “visually impaired gentleman”) as they embark on a journey to lose their virginity at a Canadian brothel that caters to their specialized clientele. Sound a bit uncomfortable? Although there are plenty of awkward moments, “Come As You Are” stays lighthearted and genuinely funny throughout the film, without getting into slapstick territory.

While none of the actors in the lead roles have disabilities, they do a fantastic job of portraying their respective characters with grace and sensitivity. Grant Rosenmeyer, who is also a producer of the film, stars as Scotty, an irritable quadriplegic who dreams of being a rapper. But in the short term, he dreams of getting laid. To that end, he recruits blind clinic worker Mo (Ravi Patel) and athletic Matt (a charming Hayden Szeto in a wheelchair). After a bit of gentle (and not-so-gentle) persuasion, the two agree to join Scotty on the road to Montreal. Sam (Gabourey Sidibe), their no-nonsense driver, takes turns rescuing her three charges and being rescued.

Director Richard Wong acknowledges the serious realities of living with disabilities, without focusing too much on tragedy. Although Matt and Mo seem resigned to accepting their lots in life, Scotty spends much of the film cursing his fate. Rosenmeyer’s adept performance keeps audiences wavering between sympathy and disgust for Scotty, who bristles at every real and imagined slight against him. Though his condition is at times achingly painful to watch, it also provides moments of humor, like when he gets into a bar fight in Chicago. When Mo and Sam are menaced by a drunk patron, Scotty appears from nowhere and drives his electric wheelchair into the man. With a furious war cry, Scotty pushes him out of the room and away from his friends. More than just a funny moment, the incident is a much-lauded victory for a man who “can’t take a shit by [him]self.”

In terms of the much-anticipated sex scenes, Wong opts to leave the actual sex out. The decision seems unexpected, given all the explicit language that Scotty enthusiastically dishes out during the film (in bars, in restaurants, in the van… etc.), but it’s a thoughtful choice. Wong portrays Mo, Sam and Scotty as men with desires, while still allowing them dignity and vulnerability—something not often given to characters with disabilities. It’s what Matt, Mo and Scotty have dreamed of all along—to be treated as “normal” adults.

The film is all set for a strong finish… until we’re blindsided by a clumsy funeral scene within the last ten minutes. As Scotty uses the funeral home as a venue to showcase his rap talent to the world, his tone deaf lines blandly summarize the film rather than provide comedic relief or bring something fresh to “Come As You Are.” The last moments of the movie see Scotty more at peace with himself and with those around him, leaving viewers with a slightly better taste in their mouths that’s almost enough to make up for that unnecessary funeral.

Though it’s by no means a perfect portrayal, “Come As You Are” is a hilarious look into what a common American rite of passage might be like for people with disabilities. Wong keeps the film moving at a brisk pace, with sweeping landscape shots and a visual scope that’s just as enjoyable as the characters’ witty dialogue. Whether you watch it for the expert comedic timing or Szeto’s biceps, the film is not to be missed. 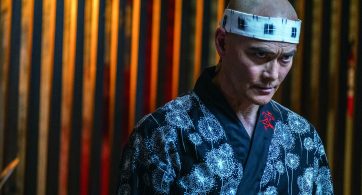