1. Pachappa was the first organized Korean settlement in the U.S.

Although Korean immigration to the United States began in Hawaii, Pachappa was the first community established for and by Korean Americans. Founded in 1905 and in operation until 1918, the thriving camp housed approximately 100 residents and was the setting of language classes, church services, weddings and other community activities.

Pachappa’s founder was Korean independence activist Dosan Ahn Chang-ho, widely believed to have been one of the writers of the South Korean national anthem. Ahn established Pachappa’s Korean Labor Bureau, which helped employ immigrants and was key to the camp’s success.

Pachappa was deeply influential in Ahn’s decision to fight for Korean independence. Bolstered by their newfound freedoms, the residents of Pachappa urged Ahn to return to Korea and join the struggle against Japanese occupiers. At Pachappa’s commemoration, Ralph Ahn, Ahn’s youngest son, said “this community here was the initiator of that action.”

Over the camp’s history, Pachappa has been the home of various immigrant populations. In the 1880s, the settlement originally housed Chinese railroad workers. Following the completion of the Santa Fe railroad, these workers left and Korean settlers arrived. In the 1920s, Japanese Americans joined the site, followed by Mexican workers a decade later. The 20-building camp was razed in 1952 and replaced by industry.

5. Pachappa’s historical importance was only discovered in 2014.

In 2014, Professor Chang, director of Korean American Studies at UC Riverside, ran across an article’s unsubstantiated claim that Riverside was the U.S.’s first Koreatown. He subsequently confirmed the fact, but only after researching old Korean newspapers, notices and church records and checking the headstones of a local cemetery. “This is the birthplace of the Korean community and Korean settlement,” Chang told NBC. “And it gives meaning as you search for your identity. Roots are very important so I think we can teach this to the future generations.” 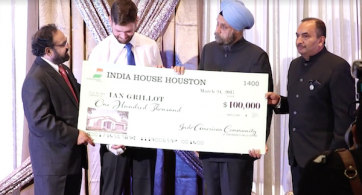 An Indian American community group in Texas gifted a $100,000 check to Ian Grillot, the 24-year-old man who was shot and hospitalized after intervening to help two Indian men […]