Tiffany Chu is freezing her butt off outside of Harvest, a hoppin’ breakfast-and-lunch spot in downtown Park City, Utah, crawling with Jon Hamm-types and industry people. This is her first Sundance Film Festival, and she’s been doing interviews all weekend, thanks to the premiere of her first-ever leading role in a film, “Ms. Purple,” directed by Justin Chon. But in this 20-degree weather, she’s only wearing a brown leather jacket—no hat, no scarf and just a pair of mittens. It’s too loud inside for the interview, so she’s agreed to talk outside.

“It’s really exciting because everything at Sundance happens on Main Street,” Chu says looking around, clutching someone else’s coffee cup to warm up her hands. “All the stores are taken over by sponsors, then they’re turned into lounges. It’s really cool how everyone’s just out and about watching films.”

When her debut film screened, audience members wept, applauded and dolloped Chon with praise during the Q&A. Chu plays the lead character, Kasie, with powerful quietude and tenacity. In the film, she’s the daughter of a terminally ill, comatose father, who lies unmoving with bed sores festering on his back. As a little girl, Kasie had dreams of studying music in conservatory, but her plans are dashed when she is left alone to support her father. Her mother abandoned them long ago, when Kasie was a little girl. And her older brother, Carey, bailed when he was 15, after a nasty fight with their dad.

Kasie earns her living as a karaoke hostess, or a “doumi,” a scantily clad paid companion who caters to men in noraebangs, or private karaoke rooms common in Koreatown. Despite how slight and taciturn Kasie is, she’s hardly weak. She is a powerhouse who refuses to give up her dad to hospice care, choosing to sponge down his lifeless body herself. She guides and defends her fellow hostesses through the slimy doumi world. She stands up to her scumbag boyfriend who wants to lock her down like some kind of trophy wife and humiliates her when she declines. She cajoles her brother Carey (played by Teddy Lee), a hapless PC bang junkie, to come home and do his part for their father. She’s the quiet storm driving the movie.

It was important to Chon that Chu know what it was like to be a doumi firsthand. “I actually experienced being a karaoke hostess for a night because—well, this is not my process, but—the director really pushed me, Teddy [Lee] and [co-star] Octavio [Pizzano] to be as close to our characters as possible,” she says, leaning closer to the outdoor space heater. “[Chon] encouraged me to try it out. So, I experienced it for a night. It was not pleasant.”

In the movie, the doumis endure the degradation of being selected for their looks, are vulnerable to sexual and physical assault, and are plied with drugs and alcohol. But Chu’s real life couldn’t be further from that of Kasie’s. As an 8-month-old baby, she emigrated with her family from Taiwan to the San Jose, California, area, where she studied hard and strived for success.

“During middle school and high school, I had after-school activities every single day,” Chu says. “I did club activities, I was in Key Club, Invisible Children, speech and debate. I would also take extracurriculars like badminton, piano, erhu. That’s all I did after school.”

Chu was a shy kid, but pushed herself to overcome her shyness because she loved to perform and be on stage. “Like in eighth grade summer school, my parents made me take a private lesson from a Harvard teacher who did speech and debate,” says the go-getter. “There was no speech and debate club at my high school, so I actually created it, and I taught the class, too.”

Unlike Kasie, who wanted to study piano, Chu wanted to be in movies. She majored in film and media studies at UC Irvine. After she got a year of freshman partying out of her system, she buckled down and got serious. She says, “I just did my homework and went to L.A. to help out with whatever production I could, just because I wanted to learn everything about film. And by the time I got to my upper division classes, I had already learned what was taught.”

Chu happened to see a posting about an audition for the leading part in “Ms. Purple.” “Alex [Chi], the producer, had posted on a Facebook group saying they were looking for an actress, somebody who could do some photos, so they brought me in for an audition,” Chu says. “That’s how I met Justin [Chon].”

Another Justin, Justin Lee, who is Chu’s boyfriend and is often recognized for his role as Annyong Bluth in “Arrested Development,” approaches her and puts his woolly gray coat on Chu’s slender cold shoulders. She flashes him a warm smile. 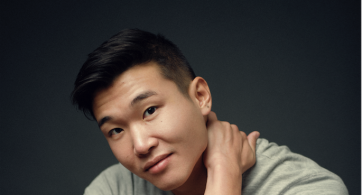 Joel Kim Booster has come a long way from telling jokes to the back of an empty bar on the East Coast. “It took about five to six months, […]