An ensemble of superheroes banding together to save the world is a plot far too familiar with audiences over the past several years. But “The Umbrella Academy”’s first season defied all expectations, bringing seven children with supernatural abilities under one roof to protect the planet from destruction. And now, the series is amping up the volume with its second season, showing that saving the world is just the beginning of the Academy’s mission.

Based on the comic book series of the same name from Dark Horse Comics, “The Umbrella Academy” first premiered on Netflix in February, 2019 and received rave reviews for its entertaining storyline and dark style. The series is co-created by Steve Blackman and Jeremy Slater, with My Chemical Romance’s lead vocalist Gerard Way and well-known comic book artist Gabriel Bá executive producing. As season one made a huge impact on TV viewers, the stakes are high for season two—and luckily, it delivers in spades.

To quickly recap season one, six of the remaining Umbrella Academy members reunite to discover who, or what, killed their father Reginald Hargreeves. Oh, and to top it off, they have to contend with the imminent apocalypse only 10 days away. That part doesn’t go down so well and the group has to jump back in time to save their own lives.

Season two picks up right where season one left off. Five (Aidan Gallagher)’s time travel powers have taken the Hargreeves back to the past, but scattered the Academy across 1963 Texas, dealing with yet another looming apocalypse. But doomsday is far from the siblings’ only concern. While the first season mostly focused on uncovering Reginald’s secrets, season two creates more room for each of the characters’ own narratives. Here, Klaus (Robert Sheehan) leads his very own cult, Allison (Emmy Raver-Lampman) works as a civil rights activist, Luther (Tom Hopper) fights for a living and Vanya (Ellen Page) finds herself some new friends, as does hospital-bound Diego (David Castañeda).

Storytelling this season has taken a huge step up from the first installment of “The Umbrella Academy,” mainly because the show grows to include prevalent social issues. In 1963 the U.S. was shaken by the assassination of President John F. Kennedy and nationwide civil rights protests, and these bigger picture events play out satisfyingly in this season. Viewers get to see re-enactments of the famous 1960s sit-in movements, and also get devastating insight into the history of police brutality, reminding us of the systemic racism that has existed in the U.S. for far too long.

The show won the comic series’ fans over with its distinctive dark humor, and season two definitely continues in this direction. The Hargreeves’ sibling dynamics help up the comedy whenever they’re together in one frame, with constant bickering and irreverent, yet thought-provoking comments from the most dysfunctional superhero family out there. Be on the lookout for some unexpected duos and trios that show the actors’ mesmerizing chemistry with one another.

Besides being an outstanding comic-book adaptation, “The Umbrella Academy” also elevates the potential of rising AAPI stars. In season one, fans were captivated by the brief appearances of the deceased Ben Hargreeves, played by Justin H. Min. Ben possesses a much livelier spirit (no pun intended) in season two, staying alongside Klaus as his voice of reason and even making a larger-than-life decision in the finale. British newcomer Ritu Arya is another delightful addition to this season, in her role as a sophisticated sociopath who has much more to offer than meets the eye.

To add to the hype, Way and Judith Hill released a brand-new track for season two, “Here Comes The End.” The fast beat and guitar bass on loop, coupled with Way and Hill’s  contrasting voices, creates another mesmerizing soundtrack for the series. The song also sets up season two’s overall theme, as it creates a suspenseful build-up that nicely mirrors the storyline’s end-of-the-world events.

Netflix series that run past one season often struggle with the pressures of avoiding a sophomore slump, but “The Umbrella Academy”’s season two does a bang-up job of expanding the world that the first season created and opening up the doors to a possible third season. All in all, the Hargreeves family members may not lead glamorous lives, but it’s the series’ unflinching embrace of their messiness that sets the Academy apart from the rest of the superheroes we encounter in mainstream pop-culture. 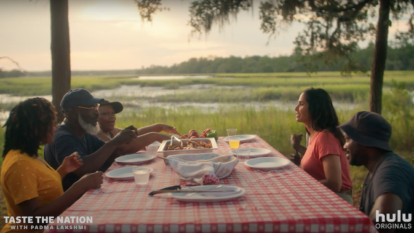 Food documentaries and docuseries can be both educational and enjoyable to watch, especially when hosted by personalities who bring a bit of lightheartedness to the table. Notable chefs bring […]