In a toast to new beginnings and old friendships alike, the 13th annual Unforgettable gala, a blacktie affair held at The Legendary Park Plaza in Los Angeles on Dec. 5, celebrated both established and fresh faces of Asian Americans making their mark in film, television and music.

Some 500 guests had even more of a reason to raise their glasses of Royal Salute Scotch whisky this year: multimedia conglomerate London Trust Media, Inc. (LTM) officially announced its acquisition of KoreAm Journal and sister publication Audrey Magazine. Founded in 2009, LTM has a portfolio that includes Feel Ghood Music and Private Internet Access, a VPN provider. The glitzy event honored veteran actors Ming-Na Wen and John Cho and bestowed Breakout Star of the Year awards upon Arden Cho and Ki Hong Lee. Wen was Audrey’s second cover model when the fashion and beauty magazine first launched 11 years ago. John Cho has graced the cover of the nearly 25-year-old KoreAm no fewer than four times over the course of his career.

Actor Brain Tee (The Fast and the Furious: Tokyo Drift) and actress Karen David (The Scorpion King 2: Rise of a Warrior) honored Cho with the first of his two awards of the evening: Actor of the Year, for Cho’s co-starring role on ABC’s short-lived sitcom Selfie.

“There must be some mistake, my show was canceled,” Cho quipped upon receiving the award. The actor, whose film credits include the American Pie franchise, the Harold and Kumar trilogy and the Star Trek film installments, also received the evening’s Royal Salute Mark of Respect award.

In his first speech of the evening, the actor gave a heartfelt thank you to his father, who was seated in the audience, before noting to the crowd that his parents didn’t take his acting career seriously until they saw a short profile on him in the Korea Times.

Reflecting on his career, Cho also thanked KoreAm for its long tradition of covering Korean Americans in the industry and elsewhere.

“I’ve seen KoreAm develop from …[being] printed on newspaper,” Cho said in his second speech of the night. “I’ve seen other Asian American publications come and go. What I believe you’re doing that separates [you from] those [publications] that have fallen by the wayside is you keep pressing into Korean American issues. You’re doing features on comfort women, adoptees, sports figures. You’re spanning the breadth of the Korean and Korean American experience. I applaud you for that.”

“We were honored to be a part of this year’s Unforgettable Awards to honor actor John Cho with the Royal Salute Mark of Respect Award,” said Laurent Cutier, Director of Scotch and Single Malt Portfolio, Pernod Ricard USA. “John truly embodies the Royal Salute spirit of leadership, dedication to community, and passion for producing quality work and is such a great example for future Asians and Asian Americans looking to break into the entertainment business. Congratulations to John and all the rest of the award recipients this year.”

“It was a really tough launch and was a major undertaking,” Wen recalled of Audrey’s early days, “so it’s fantastic that so many years later now [the magazine] is merging with a company that’s going to try and expand it. It’s great!”

Fresh off his “amazing experience” playing the young protagonist Hiro in Disney blockbuster Big Hero 6, Ryan Potter, co-presented, with K-pop artist G.NA, the Female Breakout Star of the Year award to Arden Cho for her role in MTV’s Teen Wolf.

Upon receiving her award, Cho told the audience she was “grateful,” but felt the award was premature, as her dual acting-singing career is just getting underway.

“So many amazing, talented Asian American actors and actresses have paved the way for me,” she said. “It feels surreal that I am now a part of that movement, and with that I also feel a sense of responsibility. I hope I can encourage more Asian American artists to pursue their talents and dreams, despite the obstacles and rejections.

The Male Breakout Star of the Year award was given to Ki Hong Lee for his role in the sci-fi action thriller film The Maze Runner.

The 28-year-old accepted the honor via video, since he was out of town filming The Maze Runner sequel.

“For those of you who are still trying to figure out what to do with your lives, just know that there’s a community of Korean Americans in the industry who are willing to help you and support you,” Lee encouraged in his video speech. “Please don’t be afraid to reach out.”

As the evening’s  guests feasted on a three course dinner of mixed greens, galbijjim and jumbo prawn, along with rum raisin bread pudding for dessert, courtesy of KAY12 catering, they also enjoyed performances by some of the best Asian American artists in town. Urban dance group KINJAZ kicked off the evening’s entertainment with a mesmerizing, impeccably-synchronized routine.

Recording artist and The Voice Season 5 winner Tessanne Chin gave one heck of a performance, singing Whitney Houston’s “I Have Nothing,” at her first Unforgettable—a “bolt of lightning,” John Cho said. After a busy year touring for her new album, Chin said she was looking forward to some downtime for the rest of the year.

“Seeing my family, good food, doing nothing for a week or two—that sounds like bliss to me right now,” Chin said, on the red carpet.

Choreographer and dancer Mike Song teamed up with beat box champion Terry Im, a.k.a. KRNFX, for an entertaining routine of their own featuring intricate steps and beatboxing sounds. Their unique performance brought down the house.

Musician David Choi provided guitar accompaniment while Arden Cho performed a number that had the crowd joining in. G.NA, in her first Unforgettable, showered the room with K-pop with her hit singles “I’ll Back Off So You Can Live” and “Black and White.”

Korean hip-hop icons Yoon Mi-rae, Tiger JK and Bizzy, artists represented by Feel Ghood Music, an LTM subsidiary, capped off the evening’s performances with their singles “Sweet Dream” and “Get It In,” in an encore performance from last year’s Unforgettable. London Trust Media CEO Sung Park said he felt nothing but optimism for the future of KoreAm, Audrey and Unforgettable.

“LTM is honored to carry on and carry forward the publications and Unforgettable to the next level,” he said. “We take the wisdom from the past, the courage to push boundaries today, and we will create new, exciting opportunities for the future.”

Park added, “[Our] goal is to innovate Unforgettable to become a bridge and a platform for not only Asian Americans, but Asians internationally to be recognized and honored.”

KoreAm publisher James Ryu, who cofounded the magazine with his father in 1990, expressed the same optimism.

“They represent a different generation,” he said, of LTM’s leadership. “They’re also a tech company, and we’re hoping that they’ll help us with our online presence. I know that they’re going to be bringing new ideas and a new direction to our magazines.”

Bizzy, Yoon Mirae and Tiger JK are dressed to the nines in their matching suits.

Anna Akana, presenter, and her date beam at the camera.

KINJAZ kicks off the night’s performances with their signature tight choreography.

Terry Im (KRNFX) and Mike Song mesmerize the crowd with their beatbox-dance combo. 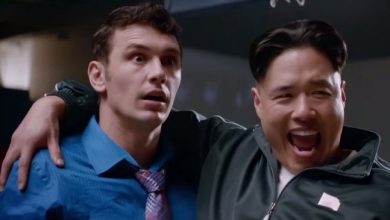 Yesterday, December 17th, Sony Pictures announced that they would not only cancel all advance/private screenings of Seth Rogen and Evan Goldberg’s The Interview, they have completely pulled the plug […]