4*Townies, the time has come! The full live performance of 4*TOWN from Disney and Pixar’s “Turning Red” is now available to stream on the Character Media YouTube page. Watch as the fan-favorite fictional boy band makes their live-action debut at the 2022 Unforgettable Gala.

The lineup includes original members Josh Levi, Topher Ngo and Grayson Villanueva, who reprise their roles from the animated film, singer-songwriter Will Jay, who you may know as a former member of IM5, and singer and vocal arranger Raymond Ortiz.

After being introduced by the film’s star Rosalie Chiang and Toronto-raised actor Simu Liu, the Grammy-nominated group performed a live version of the soulful ballad “1 True Love,” taking steps off center stage to serenade the Sandra Oh, and the earworm “Nobody Like U” to a hyped-up crowd of Asian and Pacific Islander entertainers, community leaders and honored guests.

Disney and Pixar’s “Turning Red” follows the story of Chinese Canadian Meilin Lee (Chiang) as she balances living her life as a 13-year-old and appeasing the expectations brought on by her family, all while handling a hereditary curse that turns her into a giant red panda when she experiences strong emotions. The film’s director and screenwriter Domee Shi was honored alongside co-writer Julia Cho with the Writer Award at the 20th annual Unforgettable Gala in December 2022.

Watch the full performance above! 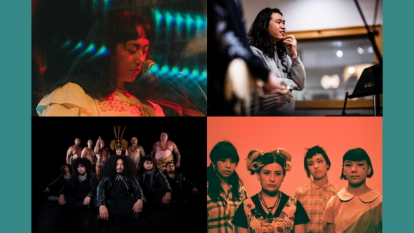 Get to know some of the most notable Asian and Pacific Islanders making waves in alternative genres.