R&B songstress Rosy Donovan opened the night with a sensual original song titled, “Got Me.” As Donovan strutted around stage and sang with confidence, the audience waved their glowsticks in rhythm of the music.

Singer-songwriter Lisa Sonoda then walked on stage, where she set down a candle beside garlands of white flowers by her feet. Gently strumming her guitar, the bespectacled singer sang a serene ballad titled, “Never Could” with a backdrop of a beautiful hillside behind her.

After Sonoda ended her performance, Miura quipped, “I want to go walk in the field now,” earning a few chuckles from the audience. The host then introduced acoustic singer-songwriter Peter Chung, winner of Kollaboration San Francisco 2012. Under the spotlight, Chung sang an original country song titled, “Back” from his Kickstarter-backed debut album, i write WE sing.

Next up was female beatboxer Track IX, who lent her craft to Pitch Perfect 2. With just a microphone, she mesmerized the crowd with her energetic beats. When it was time for the traditional Kollaboration freestyle dance-off, Track IX reappeared on stage to show off her dance moves alongside three other dancers from the audience.

Yang and Ko’s renditions were incredibly entertaining, but nothing could prepare the audience for the battle’s final act. As soon as comedienne Jenny Yang entered the spotlight, dressed in a blonde wig and a nude leotard, the entire theatre erupted in laughter. She even brought a lamp and a backup dancer—now, that’s commitment. Jenny was named Kollaboration’s first-ever lipsync battle victor for her glorious rendition of Sia’s “Chandelier,” which you can catch a glimpse of in the video below.

Following the lipsync and freestyle dance battles, Hawaiian acoustic duo Perry & Danielle calmed down the audience with their song, “Shelter.” As she played the melody on keyboard, Danielle sang in a soothing voice that complimented Perry’s crisp percussion sound.

The final contestant of the night was Korean American singer-songwriter The Will Park. Accompanied by a band, Park sang an upbeat love song while strumming his guitar.

Once all the contestants finished their performances, it was time for the guest artists to grace the stage. First up was 2014 Kollaboration Star champion Sung Lee, who wowed the audience with his live-looping beatboxing. At one point, the looping machine accidentally erased all of Lee’s tracks, but the seasoned beatboxer didn’t bat an eye as he rerecorded his beats. For the finale, Oakland-based alternative rapper Azure got the audience off their seats and jumping near the stage.

As the show came to a close, the show’s staff lined up on stage to announce which contestant would advance to Kollaboration Star in November. In the end, it was Peter Chung who took home the trophy, adding another victory to his musical résumé.

All photos courtesy of Frank Lee/Kollaboration 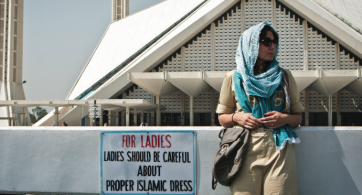 Amna Nawaz is hard-pressed to name a favorite story she’s worked on in her Emmy Award-winning career, which has taken her everywhere from Syria to South Africa, from […]