The ladies of Asian American Hollywood were some of the best representatives of film and television excellence this year, but the effects of their influence were felt off-screen as much as on. Here are the top 10 actresses of Asian descent whose talent, intelligence, class and tenacity made the biggest cultural impact this year:

“Hawaii Five-0” fans were sad to see Grace Park take her leave from the show after seven seasons of starring as badass cop Kono Kalakaua alongside Daniel Dae Kim. However, Park and Kim’s decision to leave the show after failing to come to an agreement of wage parity with CBS sparked a conversation about the importance of equality and diversity in the film and television industry.

Lucy Liu continues to check borderline-sociopathic genius Sherlock Holmes as Joan Watson on CBS’ “Elementary,” but she also balanced a slew of other film and television projects this year. On top of starring in upcoming films such as the 2018 Netflix rom-com “Set it Up” and James Franco’s forthcoming sci-fi film “Future World,” she is also all set to direct the Season 2 premiere of Marvel’s “Luke Cage,” set to return to Netflix in 2018.

Mindy Kaling said goodbye to the “The Mindy Project” this month after five years and six seasons, but fans can dry their tears knowing that Kaling has more projects in store for them. Kaling revealed in October that she was developing two new comedy series for NBC: one is about a U.S. Embassy in the Caribbean that gets an unusual new ambassador, and the other is to be a workplace romantic comedy set in the Southern California tech scene.

We all know and love Constance Wu as Jessica Huang, the tiger mom with a soft side on ABC’s “Fresh Off the Boat,” but fans will be able to see a new side to Wu when she stars in “Crazy Rich Asians” next year. The film adaptation of a bestselling book by Kevin Kwan will have Wu playing Rachel, a Chinese American woman who travels to Singapore to meet her boyfriend’s insanely affluent family.

Though previously known for her work in Bollywood, Priyanka Chopra has crossed over to American television with “Quantico.” Through the show’s two seasons, Chopra led the cast as disgraced FBI recruit Alex Parrish, who is on a quest to clear her name and those of her teammates. In addition to “Quantico,” Chopra is also a spokeswoman for UNICEF, and this year, she urged world leaders to provide more help to Syrian refugees in Jordan.

Maggie Q rose to fame in 2010 playing the eponymous character in the CW’s “Nikita,” a television drama about an escaped assassin on a mission to take down the organization that trained her. She once again caught our attention playing Tori Wu in the “Divergent” film series and as Agent Hannah Wells on ABC’s “Designated Survivor.” She is also slotted to portray the 19th century Chinese pirate queen Ching Shih in “Queen of Canton.”

Hudgens became a household name after starring in the “High School Musical” series, but the singer and actress has come a long way since her stint as Gabriella. This year, she led the cast of NBC’s “Powerless” as the enthusiastic do-gooder Emily Locke, who channels her love for helping people into her job as Director of Research and Development at Wayne Enterprises. She also provided critical insight to contestants as a judge on the most recent season of “So You Think You Can Dance.”

Ambitious mom Ali Wong had us gripping our sides in laughter with her Netflix special “Baby Cobra,” a stand-up comedy set that she performed while pregnant. Now, Wong has a regular role on ABC’s “American Housewife” playing Doris and is also reportedly joining “Fresh Off the Boat’s” Randall Park in an untitled upcoming rom-com for Netflix.

Chloe Bennet has been portraying Agent Daisy “Skye” Johnson on ABC’s “Agents of S.H.I.E.L.D.” since 2013, but her character has seen critical development over the years. Audiences recently discovered that her character is an Inhuman with seismic powers, meaning that she is able to induce earthquakes and control the earth. Bennet, who was born Chloe Wang, also made headlines this year when she called out Hollywood for refusing to cast actors with stereotypically Asian last names.

Jamie Chung acting career began with a variety of small supporting television roles, but through hard work and perseverance, Chung has climbed up the ranks and now has several series regular roles. She kicks butt as Mulan on ABC’s fairytale retelling series, “Once Upon a Time,” and currently stars as Clarice Fong, a sarcastic mutant with teleportation powers, on Fox’s Marvel series “The Gifted.” She also had a small role in Zoe Lister-Jones’ “Band Aid,” a comedy-drama that premiered at the Sundance Film Festival in January. 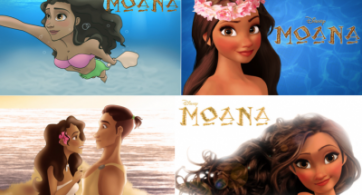 Auli’i Cravalho is headed back to the recording booth to reprise her role voicing the titular heroine of Disney’s “Moana” for a Hawaiian-language version. The University of Hawaii’s Academy […]