Not all Asians look the same.  I repeat, not all Asians look the same. It seems no matter how many times we say it, people simply assume that all Asians share the same physical features. Some believe we all have the same body structure and others even think we all have the same kind of hair. Of course, we know this is absurd. We know that there are plenty of ethnicities which categorize under the umbrella term “Asian” and we know there are plenty of Asians who are of mixed race. So why do people think all Asians look the alike? Well it may have a thing or two to do with media’s portrayal of Asians. If audiences have only been exposed to a very particular type of Asian, how can they know we’re all different? This lack of exposure may be the very reason many celebs who are bi-racial or multiracial are often overlooked in the Asian community. Even if they don’t necessarily “look it,” all of the following celebrities are Asian. Check out our list of 20 Asian celebs you probably didn’t know were Asian.

3)  Chad Michael Murray of One Tree Hill, The Cinderella Story featuring Hillary Duff, and Freaky Friday is a quarter Japanese.

4)  Dean Cain, superman of the TV series, Lois and Clark: The New Adventures of Superman is a quarter Japanese.

5)  Nicole Scherzinger of PussyCat Dolls is half Filipino.

6)  Keanu Reeves of The Matrix is a quarter Hawaiian and a quarter Chinese.

7)  Darren Criss of the TV series Glee is half Filipino.

9)  Tyga, the rapper, is half Vietnamese.

11) Enrique Iglesias is half Filipino.

13)   Mark-Paul Gosselaar, aka Zack Morris of the 90’s hit TV show Saved By The Bell, is a quarter Indonesian.

14) Kristin Kreuk of the TV series SmallVille and Beauty and the Beast is half Chinese.

15) Kelsey Asbille Chow of the MTV series Teen Wolf  and The Amazing Spiderman is part Chinese.

16)   Host of the TV show Lip Sync Battle and model, Chrissy Teigen is half Thai.

17)  Rob Schneider of Grown Ups and The Hot Chick is a quarter Filipino.

18) Chanel Iman, the Victoria Secret Angel and model is half Korean.

19) Model Karrueche Tran is half Vietnamese.

20) Berenice Marlohe from the famous Bond series, SkyFall is part Cambodian and Chinese. 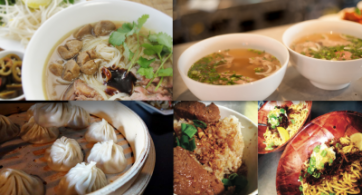 When we think comfort food, most of us revert back to the dishes our moms made us. Here, we salivate over home cooking-from-another-mother.  PORK ADOBO BY CHEF CHARLEEN CAABAY, […]