For the past 50 years, Comic-Con International has been the ultimate haven for nerds everywhere.

From July 18 to 21, over 135,000 attendees are expected to attend Comic-Con’s various panels, signings and experiences. The organizers recently released a quick guide to help you navigate the event, but if you’re intimidated by the packed pages, we’re here to save you. Whether you have a badge or not, this list of happenings will help you make the most of your time at Comic-Con.

“The Good Place,” “Superstore” and “Brooklyn Nine-Nine” have become some of America’s favorite sitcoms with their heartwarming characters and storylines. The casts from each show will bring their charisma to the table throughout the weekend, so be sure to check out the panel schedules. Even if you don’t have a badge, you can explore each show’s world at NBC’s pop-up experience in the Gaslamp Quarter. RSVP here.

No badge, no money? No problem. This epic museum located in Balboa Park, is open to all. You can paint like Bob Ross with a Certified Ross Instructor (yes, that’s a real thing) or marvel over comic artist Jim Lee’s talent at the Cover Story exhibit. There is also a Batman Experience, which will include a large collection of the vigilante hero’s paraphernalia. Learn more at Comic-Con Museum’s website.

“Suicide Squad” was disappointing, but you have to admit that “Arrow” is pretty good. DC’s new shows like “Batwoman,” “Pennyworth” and “Harley Quinn” will make their first appearance on Wednesday. Check out the full schedule here.

Sadly, this is SDCC’s ZombieWalk last year, but it’s all the more reason to get your undead on while you can. Participants will be lumbering around Gaslamp on Saturday at 7 p.m. Organizers recommend getting a dinner reservation at any restaurant on Fifth Avenue for the best sightseeing. By the way, there are still spots left for those interested in joining the walking dead.

If you also can’t wait for the new season of “The Terror: Infamy,” which is set to premiere August 12, then don’t miss the panel on Friday. “The Walking Dead” and “Fear The Walking Dead” panels will be holding panels, as well. AMC is also partnering with Feeding America, so if you have any canned food laying around, then drop them off at their “DeadQuarters” experience. Check out the full schedule of panels and events here.

Starting Wednesday, immerse yourself in Ryme City and meet the characters from “Pokemon: Detective Pikachu.” The experience, which includes an infinity room, will be held outside the Omni Hotel. You might even be able to win prizes and take pictures with Pikachu himself.

Like their movies, the number of Marvel panels and events at SDCC feels countless. Although you could try to catch every single one on the laundry list, we recommend choosing a few. Most notably, the “We Love You 3000 Tour” featuring the Russo brothers will kick off on Saturday. “Agents of S.H.I.E.L.D.” will have a panel on Thursday and a signing on Friday. Stay tuned—Marvel Studios is reportedly announcing “Eternals,” “Black Widow,” “Shang-Chi” and other movies during the Saturday 5:15 pm Marvel Studios panel in Hall H.

Chuck Jones was a prolific director who created over 300 animated films and some of the most famous characters in animation history, including Bugs Bunny and Road Runner during his 60-year-long career. Events honoring him and other legendary artists are held at his gallery every Comic-Con. This year, you can meet “The Simpsons” storyboard artist Stephen Reis or play a game of Warner Bros. trivia with Jones’ grandson, Craig Kausen. Call 619-294-9880 or email sandiego@chuckjones.com to RSVP.

Netflix has been teasing with “The Witcher” images, and we really need to see more of Geralt’s beautiful horse, Roach. Hopefully, Netflix will tell us more about the show at their panel on Friday which will take place in Hall H from 2:15 to 3:15 p.m. Netflix will also be giving us a sneak peak of “The Dark Crystal: Age of Resistance,” which hits the streaming service on August 30.

At the Her Universe Fashion Show, fashion and fandom intersect with ball gowns and Miyazaki-inspired street fashion. The contest, which will be held on Thursday at the Manchester Grand Hyatt, is free to watch. The winner will have the opportunity to work with Her Universe founder Ashley Eckstein to design a fashion collection for Hot Topic.

Get some exercise this Comic-Con by running around and following clues. Take part in The Great SherlockeDCC Scavenger Hunt 2k19, and you could become The Napoleon of Crime, The Consulting Detective or earn the at-least-you-tried Gold Star Award. At the free Varèse Sarabande Records hunt, you could possibly win a signed vinyl and a meeting with “John Wick” composer, Tyler Bates. 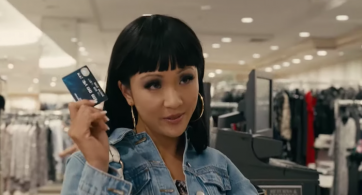 Mom… is that … you? “Hustlers”’s first trailer dropped two days ago and Constance Wu (“Fresh Off the Boat”) is taking center stage as Destiny, a young stripper participating […]