Move over, Captain Marvel and Spider-Man: there’s a new superhero in town. Over the weekend at San Diego Comic Con, Marvel Studios announced that Simu Liu will play superhero Shang-Chi in “Shang-Chi and the Legend of the Ten Rings,” currently slated for a Feb. 12, 2021 release.

Since the media giant confirmed plans for the much anticipated film earlier this year, fans across the globe (including us) have speculated who might take on the mantle of the titular superhero. Seeing as the original character is based on martial arts legend Bruce Lee, “Kim’s Convenience” star Liu came as an unexpected, but welcome choice. The Chinese Canadian actor rose to fame with a handful of recurring TV roles and appeared in NBC’s short-lived series “Taken,” before landing his role as Jung Kim.

Since Liu’s announcement made social media rounds this weekend, actors, writers and more have reached out to congratulate Liu and comment on why an Asian superhero is such a crucial step for Asian representation in media.

If that weren’t enough buzz-worthy news, a few other cast and crew surprises have also been announced. Hawaii-born director Destin Daniel Cretton (“The Glass Castle”) is set to direct the film while Nora Lum, aka Awkwafina (“The Farewell”) is on the bill to play an as-of-yet unnamed role. Plus, veteran Hong Kong actor Tony Leung (“Lust, Caution”) will portray the villainous Mandarin (a character that’s already stirred a hotpot of Internet controversy). Hands up if you can’t wait to see how it plays out in 2021!

At the panel, Marvel also announced plans for the rest of its Phase 4 films, including “Eternals,” which will be directed by Chloé Zhao (“The Rider”) and feature Kumail Nanjiani (“Stuber”) in a lead role alongside Richard Madden, Salma Hayek and Angelina Jolie. Watch a full recap of Marvel’s SDCC panel below: 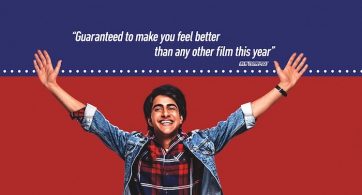 In “Blinded by the Light,” Viveik Kalra plays Javed, a shy, slouching student with a thick mop of black hair and an obsession with Bruce Springsteen. But at the […]