Susan Ahn Cuddy, long considered a living legend for shattering barriers for women and Asian Americans in the U.S. Navy and later as a code-breaker for the National Security Agency, passed away at her home in Northridge, Calif., on Wednesday afternoon, June 24, said her son Philip “Flip” Cuddy. She was 100 years old.

“She died very peacefully in her own bed,” said Flip Cuddy. “Right up to the very end, she was clear-headed. But her body was just not going to support her mind.”

Left: A portrait of Susan Ahn Cuddy from the 1940s.

Cuddy said his mother, a feisty woman who stood only 4-foot-11, with a very thin build, had kept a busy schedule even in her final weeks, having just returned from a Korean American Coalition conference in Paradise Springs, in California’s San Gabriel Mountains, where she once again inspired the youth in attendance to set their sights high.

Though her son did most of the talking, Susan, sitting in her wheelchair, was able to answer some questions and “talked clearly and was engaged,” Cuddy recalled. “[The youth] couldn’t believe her story. She said some really neat things that made some girls in the audience cry. She was saying what she sees is very promising—[that] they can do anything they wanted. Then, she said it was an honor for her to be at the event.

“It’s the end of the Susan Ahn Cuddy era,” he said wistfully.

Susan stands with her parents, older brothers and baby sister.

That era began on January 16, 1915, when Susan Ahn was born in Los Angeles to two revered Korean patriots: independence leader Ahn Chang Ho and his wife Helen Ahn, who were also among the earliest Korean immigrants to arrive in America, in 1902. The couple tirelessly worked to liberate their mother country from Japanese colonization; Ahn Chang Ho would eventually give his life to that movement in 1938, after succumbing to injuries from his constant imprisonment and torture by the Japanese.

The third child of five, and eldest daughter, Susan always said that her parents’ sacrifice and dedication to the Korean independence cause would play a defining role in her own identity and values. After Japan bombed Pearl Harbor, she enlisted in the U.S. Armed Forces, becoming the first Asian American woman in the Navy. This was at a time when anti-Asian sentiment in the country was high and women were still battling overt sexism in the military. She told biographer John Cha, who wrote Willow Tree Shade: The Susan Ahn Cuddy Story, published in 2002, “A lot of people thought that women didn’t belong in the service. That made us try harder.”

Susan fires a gun at a shooting range.

Susan was not the type to back down from any challenge, and she worked her way up in the Navy, becoming a Navy LINK instructor in 1943, teaching aviators how to maneuver in a simulator cockpit and later becoming the first female aerial gunnery officer in the Navy—in other words, she trained fighter pilots how to shoot down enemy aircraft. In Willow Tree Shade, Cha described one incident where a white male pilot protested having to take directions from Susan because she was Asian and female. The latter wouldn’t have any of it. “Down here, you will shoot when I tell you to shoot!” she told the pilot.

Susan eventually joined the Navy’s elite code-breaking team, and went on, as a civilian officer, to work for the NSA. During the Cold War, she ran a department that worked on digging up Soviet Union intelligence, supervising 300 agents.

Susan stands out in this 1956 photo with her fellow NSA peers.

Even in her personal life, Susan proved a trailblazer. She and fellow code-breaker Frank Cuddy, who was white, defied anti-miscegenation laws in place in 1947 and wed at the only place that would marry them: a Navy chapel in Washington, D.C. The couple had two children, Flip and Christine, and it was this new role as a mother that would cause Susan to eventually leave the intelligence community in 1959, so she could spend more time with her children. Returning to California, she helped her eldest brother Philip Ahn (the pioneering Asian American actor) and sister Soorah run their popular Chinese restaurant, Moongate, in Panorama City. After Philip died in 1978, Susan largely filled the role of Ahn family representative and worked hard to archive her legendary family’s records.

Even in her elder years, Susan remained active, speaking at Navy functions and Korean American community events, even campaigning for then-presidential candidate Barack Obama. A breast cancer survivor, she also helped raise money for the cause. In recent years, she was honored with numerous accolades by government bodies and nonprofits. This past spring, the Los Angeles County Board of Supervisors designated a “Susan Ahn Cuddy Day.” Supervisor Mark Ridley-Thomas, who introduced the declaration, was an especially devoted fan. “These were all firsts as an Asian American woman in a man’s world,” he said of her accomplishments, during a March 10 ceremony. “Anti-Asian sentiment was brazenly prevalent, but that didn’t deter Susan Ahn Cuddy—she just knew what her mission was.”

Susan’s remarkable legacy also inspired a play dramatizing the events of her life, titled Born to Lead, produced for the stage this past March by the L.A.-based East West Players theater company.

Just weeks ago, Susan attended the annual dinner for the nonprofit K.W. Lee Center for Leadership in Los Angeles. She was in her wheelchair, smiling proudly when Flip was given a surprise honor for his consistent participation in the Center’s leadership training program for teaching young people about Korean and Korean American history, sharing the stories of his grandparents and mother.

K.W. Lee, the Korean American journalist after whom the center is named, was present at that dinner, and said by email, “It’s sheer karma that we were all joined together at the June 12 dinner. … It was her farewell appearance, and we were blessed.” Added Lee, “She will never leave us.”

Susan with her son Flip Cuddy and journalist K.W. Lee at a June 12 dinner at the Oxford Palace Hotel in L.A.’s Koreatown.

In a 2009 Proust-like interview with KoreAm, Susan, who spoke quite matter-of-factly, reflected on her own life. “I achieved what I wanted to, and I’m very fortunate to have two wonderful children,” she said. She advised young people that, in order to find happiness, to “do your own thing.”

When asked what she thinks happens to people after they die, she answered, “I’m not sure, but I think it’s whatever you’re raised to believe. I believe I’ll go to bigger grounds—I don’t know if it’s heaven or not. But I think I’ll go there and meet my father and mother and my two brothers who are gone.”

Defining Herself: A Proust-like Interview with Susan Ahn Cuddy 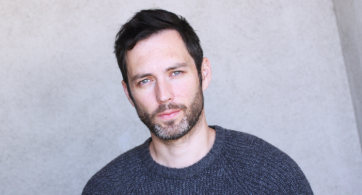 Part of the renowned YouTube filmmaking duo The Brothers Riedell, Chris Riedell plays Ben’s know-it-all best friend Henry in Wong Fu’s first feature-length film, Everything Before Us. Throughout the […]