As the novel coronavirus spread throughout the United States in late February and early March, leading chains AMC Theatres and Regal Cinemas announced precautionary measures to reduce seating capacity by 50 percent and to implement enhanced cleaning services. However, following growing public concerns for the virus and shelter-in-place sanctions, movie houses across North America had closed down by mid-March.

With no theaters left open, some of the most anticipated tent-pole films were left in limbo. Following its premiere in New York City on March 8, “A Quiet Place Part II“ was rescheduled from a March 20 U.S. opening to one in September due to CDC restrictions on public gatherings. Then, in a domino effect, the ninth “Fast and Furious,” “Mulan,” “No Time to Die,” “Black Widow” and “Wonder Woman 1984,” all films that were slated for splashy international roll- outs and red carpet premieres in the spring and summer, announced they would also be pushing back release dates. Films that had already opened in theaters, such as “Invisible Man,” “Onward” and “The Hunt,” found some saving grace digitally, moving from the silver screen to video-on-demand platforms.

With the number of coronavirus cases rising around the globe, high-profile sets across film and television were heavily impacted. One of the first productions to close was “Mission: Impossible,” which was scheduled to shoot parts of its seventh installment in Venice in late February when a sudden spike in coronavirus cases led to Italy going into lockdown. Additional productions overseas, including “The Falcon and the Winter Soldier“ that was shooting in Prague and “Shang-Chi and the Legend of the Ten Rings“ that started production in Australia, have also since closed down their sets.

Despite these measures, concerns grew for those still working on busy and highly populated studios, especially in densely populated cities like New York, which saw a rapid rise in the number of coronavirus cases over the past few months, reporting the highest number of infection rates in all of the U.S. But change finally came to the Big Apple once Broadway announced it would close its theaters until April 12, which has since been extended, optimistically, to June 7. Shortly after, “The Tonight Show Starring Jimmy Fallon,” “Late Night With Seth Meyers” and “SNL,” which are all taped in New York City, announced their decisions to suspend production.

“We were all pretty relieved. We didn’t know because the country didn’t know, but now in hindsight, February was when we should have shut everything down,” says Young Bek, makeup artist on “SNL.” “No one knew anything. It wasn’t a collective thing where everything in New York was shutting down at the same time; it was here and there.”

Actor Nico Hiraga (“Booksmart“) received word just a few days before he was to head to Vancouver, Canada, to shoot “The Power,” Amazon Studios’ feminist sci-fi series featuring Leslie Mann, Rainn Wilson and “Moana” star Auli’i Cravalho, that production would not be commencing. “The Power” is currently just on hiatus, as one of the more fortunate productions that have not faced major cutbacks at this time.

The question—and a truly daunting one at that—now lies in when things will pick back up again. “There’s differing views on what the outcome will be,” Hiraga says. “It’s tricky and really hard to determine any kind of move- ment right now, but people are trying to stay as hopeful as they can.”

Actress Miki Ishikawa (“The Terror: Infamy“), who was in Los Angeles when “The Falcon and the Winter Soldier” closed production in Prague, echoes Hiraga’s sentiment. “It’s important to stay as positive as you can,” says Ishikawa. “I try to stay busy and maintain a schedule, but there are tough moments in between.” What helps keep her at peace is the positivity that stems from camaraderie. Every Monday, Ishikawa and actresses Christine Ko, Ally Maki, Jenna Ushkowitz, Dianne Doan, Sherry Cola and Kara Wang band together and stay connected via weekly Zoom calls, uplifting one another during these unprecedented times.

Hiraga, whose resumé also includes time spent as a professional skateboarder, splits his days between reading scripts and indulging in blasts from the past, having recently finished the “Teen Titans” series. And when the weather’s nice and he’s in need of a refresher, he skates. Hiraga notes that it’s about staying motivated. Much like the rest of us, he says, “I’ve gotten discouraged and had some dark times. But try your hardest to stay occupied, and have a good mindset and stay active. Just [keeping] it moving is the key to this.”

Bek turns to lighter fare during her down time. On April 11, “SNL” aired a remote episode hosted by Tom Hanks, featuring the cast per- forming their skits via Zoom. “I was so happy our show came on Saturday. It was good to laugh,” says Bek. Productions including “American Idol,” “The Late Show With Stephen Colbert” and “The Late Late Show With James Corden” have also started filming remotely in efforts to entertain and uplift those of us stuck at home.

While the future of the industry is still ambiguous, there is some movement. Select states are working toward opening up theaters again. Films with delayed premieres have now announced new release dates. According to some reports, there could also be a piece of the $2.2 trillion stimulus relief package allocated toward the industry’s workers. And hopefully, a vaccine will become available in our near future.

But in the meantime, there’s still a lot of great content out there to catch up on.

Here’s how the interviewees have been keeping busy:

Miki Ishikawa – watching: “Kingdom,” “Giri/Haji,” “Sex Education” | rewatching: “The Sopranos,” “The Wire” | writing: TV series on a half-Japanese, half-Korean adoptee who explores what it means to be Asian American in Los Angeles. 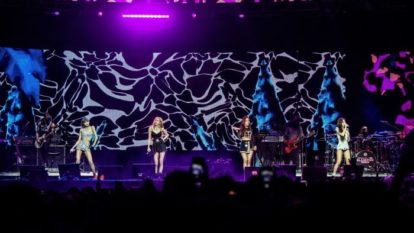 The clock strikes 12, intense mouse clicking commences, nervous keyboard clattering starts to echo and palms slowly start to sweat. The monitor blinks and a message appears: “You are […]